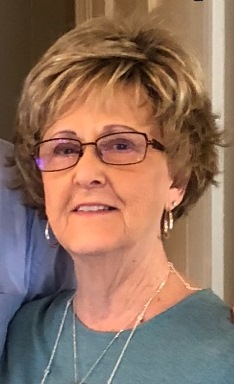 Marion – Charolette A. Russell, 74, of Marion passed away at 12:10 pm, Saturday, August 11, 2018.  Funeral services will be held at 2:00pm, Thursday, August 16, 2018 at the Blue Funeral Home in Marion with Dr. Bob Dickerson officiating. Visitation will be from 12:00 pm until the time of the service at the funeral home. Burial will be at East Liberty Cemetery south of Marion. Memorials may be made to Baptist Children’s Home and Family Services; 949 County Road, 1300 North, Carmi, IL  62821; envelopes are available at the funeral home or may be sent C/O Blue Funeral Home, P.O. Box 411, Marion, IL  62959.   Mrs. Charolette Russell was born October 12, 1943 in Marion, IL to Earl (Dutch) Wayland Rix and Anna Maria (Kobler) Rix.   She was the cherished wife of Leonard Russell and loving step-mother to Aaron Russell of Bolingbrook, IL; the step-grandmother, known as “PaPa”, to Kelsey and Ethan Russell of Wheaton, IL and sister to Jacob (Jay) William Rix of Marion.  In addition, she was the dear aunt to the nieces and nephews including Jana (David) Cooke of Springdale , AR; Kim (Keith) Dooley and Tamie Rix of Marion; Darrell (Vicky) Cawvey and Brian(Laura) Cawvey of Collinsville, IL; Bruce (Tracey) Cawvey of Simi Valley, CA; Michael (Julie) Rix, Deborah Forster, Rhoda (David) Powers, Lunda (Jeff) Pritchett all of Houston, TX and Dana (Mike) Rix-Crouse of Carbondale, IL. She was the great and great-great Aunt Charolette to many nieces and nephews.  Charolette was preceded in death by her parents; first husband, Darwin Baggett; brothers, Gary and Clifford Rix; sisters Earline Chamness and Elaine Cawvey; and niece Regina Swafford.  As a life time member of the First Baptist Church in Marion, she served the church as Treasurer, Chairman of the Search Committee and as a member of the church choir.   She was devoted to her work and strived for perfection in her career. She spent most of her working years in various capacities in banking. She also enjoyed her time as co-owner of Ms. Toppers. In addition, she worked as a Pre-arrangement Counselor at Blue Funeral Home in Marion.   Serving and supporting her community was of utmost importance to her and she stayed active in various roles throughout her life. As a community leader she served as President of the Marion Chamber of Commerce as well as being the Chambers’ Member of the Year; President of the Marion Housing Authority and President of the Fortnightly Group. She also worked on the Marion Memorial Health Foundation and as a member of the Women of Compassion of the Baptist Children’s Home and Family Services.   Our lives have been absolutely blessed to have had such a wonderful wife, step-mother, grandmother, sister, aunt and friend. Each and every one of us know the deep and meaningful relationships that we shared with her. With broken hearts we say goodbye to someone so very special to us all. May you rest in peace our dearest one.
To order memorial trees or send flowers to the family in memory of Charolette A. Russell, please visit our flower store.