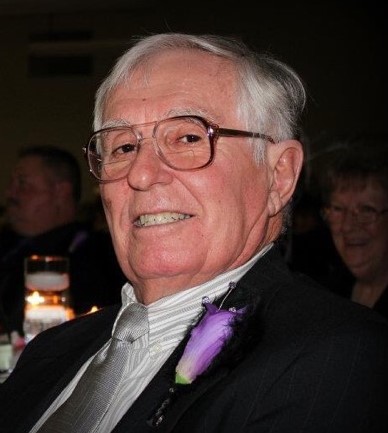 Don was born on November 21, 1936 in Harrisburg to Edward and Freida (Kruckenburg) Fluck.  He married Peggy Dean Anderson on October 31, 1970 in Marion and together they shared 49 years of marriage.

Don served in the National Guard.  He was a coal miner and during his years working there, his coworkers nicknamed him “Flucky.”  Don also enjoyed enjoyed farming, which he did with his son.  He  loved his grandchildren and great grandchildren, and was always willing to lend a helping hand.  He had a nickname for every person he ever met.

Many nieces and nephews and other extended family members and friends.

He was preceded in death by his parents and his grandson, Dallas Travelstead.

A graveside memorial service will be held on Sunday, July 12, 2020 at 1:00 p.m. at Davis Prairie Cemetery with Rev. Chris Cutsinger officiating.  Those attending the service are asked to meet at the cemetery.

Due to health concerns related to the COVID-19 virus, those attending the memorial service are asked to follow social distancing guidelines and the wearing of masks is encouraged.

Memorials may be made to Hospice of Southern Illinois or Shriner’s Hospitals for Children and will be accepted at Blue Funeral Home/P.O. Box 411/Marion, IL 62959

To order memorial trees or send flowers to the family in memory of Donald Fluck, please visit our flower store.