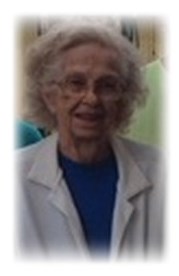 Jefferson City, MO-Dorothy Marguerite “Margaret” (Hanks) Rushing, 84, formerly of Marion, passed away on Monday, April 16, 2018. Margaret was born on August 2, 1933 to Alonzo and Mary (Klope) Hanks. She was preceded in death by her husband, Hubert “Kenny” Rushing in 1996 and 6 of her 9 siblings. She is survived by her six children: Pam (Homer “Bud”) McCalla of Johnston City, IL; Rita (Harry “Lester”) Craig of Marion, IL; Jim (Sue) Rushing of Jefferson City, MO; Janet (Tim) Morgan of Kansas City, MO; Kathy Licklider of Jefferson City, MO; Gail (Rodney) Nilges of Jefferson City, MO; 9 grandchildren: Cheryl Quertermous, Scott McCalla, Lisa Kalous, Larry Craig, Melinda Morgan, Nathaniel Morgan, Jessica Martin, Rene McDevitt and Ryan Nilges; 11 great-grandchildren; 2 great-great grandchildren. 2 sisters: Elsie Black, Carrie Hensley; One brother, Ruel Hanks; and a much loved host of nieces and nephews. Growing up on the farm gave Margaret a love of the simple things in life: fresh vegetables from the garden, hanging clothes on the clothesline and never throwing anything away that still had a useful purpose – this was evident by her enjoyment of making denim quilts to give away from old blue jeans. She met her husband Ken while waiting tables in a small café in Marion. She became a military wife and traveled to CA and TX.  After their time in the military they returned to IL.  Later, she returned to work as a waitress for many years. Eventually Ken’s job took them to Jefferson City, MO. During her retirement years she enjoyed reading novels and westerns, making quilts and working jigsaw puzzles. Funeral services will be held at 11am on Friday, April 20, 2018 at Blue Funeral Home with Rev. Bobby Parker presiding. Burial will follow at Rose Hill Cemetery. Visitation will be on Thursday, April 19, 2018 from 5pm-8pm at the funeral home.
To order memorial trees or send flowers to the family in memory of Dorothy Marguerite Rushing, please visit our flower store.