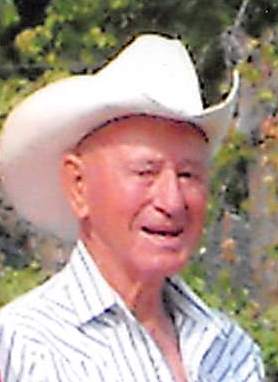 Goreville-Frank Huff, 102, passed away on Monday, November 6, 2017 at the CLC at the VA Medical Center. Frank was born on February 10, 1915, about 40 miles west of Nashville, TN to Mitchell and Lizzie (Keith) Huff. When he was two, the family moved to Southern Illinois, settling in the Goreville area.  His parents had five more children; George, Andy, Lawrence, Myrtle and Dora Lee. In 1940 Frank married Velda Tripp and together they shared 30 years of marriage till her passing in 1974. Frank would say that he fooled her but could never fool anyone else. Frank served in the U.S. Army during WWII. He went to Europe to fight and was wounded in Belgium and received a Purple Heart.  All four of the Huff brothers saw combat in WWII. Frank was a farmer and enjoyed horseback trail riding, fox hunting and dancing. He loved spending time with his friends and family. Survivors include: Daughter-Barbara Jean (Michael) Brown Grandsons-Russell (Tamra) Kelly and Eric (Khara) Kelly Great grandchildren: Zak Kelly Angelina Kelly Madison Kelly Kaydence Kelly Will Kelly Brother-Andy (Beaulah) Huff Nephews-Mike Harris and Gary Harris Nieces-Teresa Boaz, Dorothy Brookes, Debbie Estes and Beverly Alvstad He was preceded in death by his parents; wife; three brothers and two sisters Funeral services will be held on Saturday, November 11, 2017 at 2pm at Blue Funeral Home in Goreville with Rev. R.G. Null officiating. Burial will follow at Cana Cemetery. Military rites will be performed by the Johnson County VFW with assistance from the National Guard.  Visitation will be on Friday, November 10, 2017 from 5pm-8pm at the funeral home. Memorials may be made to Cana Cemetery or Hospice of Southern Illinois and will be accepted at Blue Funeral Home/PO Box 411/Marion, IL 62959
To order memorial trees or send flowers to the family in memory of Frank Huff, please visit our flower store.