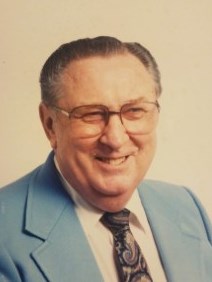 Marion-Harlen Drew, Jr., 85, passed away on Sunday, August 12, 2018 at the VA Medical Center in Marion. Harlen was born on December 30th, 1932 in Carbondale, to Harlen Drew, Sr. and Evelyn (Miller) Chamness. He married Ruby Ice on December 27th, 1952 at West Frankfort Trinity Church. They had two children, Gregory Drew and Harlena Arrowood. Harlen was a hard-working man who was committed to providing for his family. His started his first job at the Marion Bowling Alley when he was 10 years old. When he was a teenager, he worked at the Movie Theater where he was nicknamed Gillette because he was so particular about his appearance. After he graduated Marion High School he joined the United States Air Force in 1950 and served as a Flight Engineer. He served in the Korean War and Vietnam War. He retired in 1970 as a Master Sgt. After his military retirement, he worked for Transamerica as a Claim Adjuster Manager and retired in 1991. Harlen enjoyed spending time with his family, traveling, and volunteering. He volunteered as a Boy Scout leader when his son was in the scouts and also volunteered with the Civil Air Patrol while his grandsons were CAP Cadets. Harlen was a volunteer at the Marion VA Hospital for 13 years. He had a big heart and had love for his three families, the Church of Christ, the military, and his family. His survivors include his wife: Ruby Drew, children: Gregory & Debbie Drew and Harlena & Frank Arrowood, Grandchildren: Kassi & Steven Beasley, Ryan & Kelly McKinney, Aaron Drew, Tabitha & Jake Crain, and Austin Arrowood. Great Grandchildren: Evan Beasley and Declan Beasley, and a niece and four nephews. He was preceded by his parents and step-father LeRoy Chamness and his sister Betty Wilce. Funeral services will be held on Wednesday, August 15, 2018 at 11am at Blue Funeral Home in Marion with Rev. Bill Brandstatter officiating. Burial will follow at Odd Fellows Cemetery in West Frankfort.  Military Rites will be performed by the Marion VFW with assistance from the U.S. Air Force.  Visitation will be on Wednesday from 9am until the time of service at the funeral home.
To order memorial trees or send flowers to the family in memory of Harlen Drew, please visit our flower store.