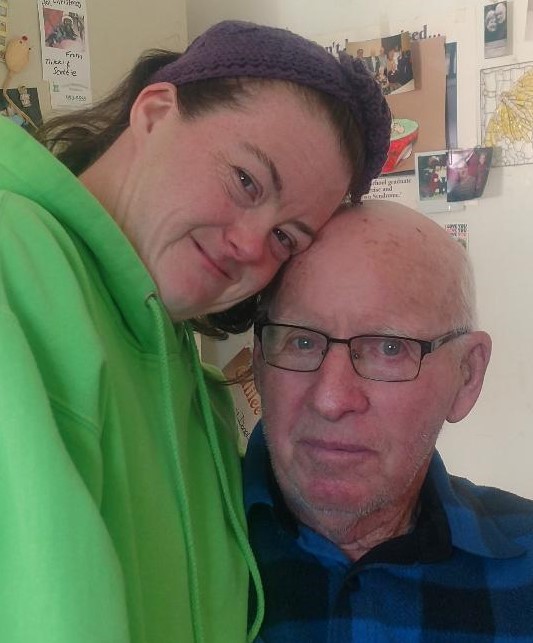 Bob (Dad, Grandpa Bob, Pops, Uncle Bob) was born in Creal Springs, the youngest son of Monroe and Daisy (Wright) (Reed) Donelson on January 10, 1931.  He proudly served his country during the Korean Conflict, 1951-54, with the U.S. Navy.  While docked in Boston, Massachusetts he went roller skating and met the love of his life, Alice Marie Parsons.  They married April 10, 1953 in Massachusetts, and shared nearly 55 years of marriage until her passing on December 17, 2007.

Eventually, Bob and his family made it back to Creal Springs, where he worked at the Olin Corp., Peabody Mines, and road construction, all while building his true passion, his farm (land, hogs, cattle, crops).  Though it seemed he only stopped to eat, watch news, and sleep, he still insisted the hardest working man he ever knew was his brother, John.  He was also an avid coon hunter.  He had several good dogs and won his share of trophies.  We had an old couch in the basement fondly referred to as “The Liar’s Couch” for all the hunting tales.  Preceding him in death, that he sorely missed, were special friends and fellow coon hunters, Edward Boyd (Ho Ho, Preacher Boyd), George Lenon, Vernie Johns and Danny Craig.

Though always an honorable man, and honest to a fault, Bob wasn’t a Christian until March, 1979.  As with everything, once a believer, he served God whole-heartedly the rest of his days.  First, burying himself in the word for months, and asking many questions.  Later, renting a church in Creal Springs for retired preachers to use, starting a nursing home ministry, writing articles, preaching, singing, witnessing everywhere to anyone, giving money, food and physical help wherever needed.  He and Marie were tireless in their service to God.

Bob, being from a family of 13, and Marie from 9, visitors were never scarce.  Bob’s mother and Marie’s parents, as well as many other extended family, lived at Bob’s temporarily and some lived there until death.  Many summers extra cots filled the basement and unfinished upstairs.  Bob was a generous man, sharing his home and property with family and friends, never asking for anything in return.  He will always be remembered for his fun-loving teasing, work ethic, love of God, generosity, big smile, and even bigger heart.

Special thanks to the staff at the Marion V.A., Marion Active Day Adult Daycare, Pinckneyville Nursing and Rehab, Interim Health Care – Sheila K., Help at Home – Conner B., Hospice of Southern Illinois, Shawnee Alliance – Jennifer R., and Attorney Andrea McNeill (Rob) for all your compassionate service and support during Dad’s last few years.  You will always be remembered.

Thanks again to all law enforcement and emergency response personnel and volunteers for bringing Dad back to us on July 25, 2018 after being lost for nearly 12 hours.

DUE TO HEALTH CONCERNS RELATED TO THE COVID-19 VIRUS AND BY THE SIGNING OF EXECUTIVE ORDER BY GOVERNOR J.B. PRITZKER, a private funeral service and visitation will be held at Blue Funeral Home in Marion with Pastor Todd Greiner officiating.  Burial will be in Donelson Family Cemetery.

For those who prefer, memorial donations may be made to the Southern Illinois Down Syndrome Association and will be accepted at Blue Funeral Home; P.O. Box 411, Marion, Illinois 62959.

To order memorial trees or send flowers to the family in memory of Robert Eugene Donelson, please visit our flower store.