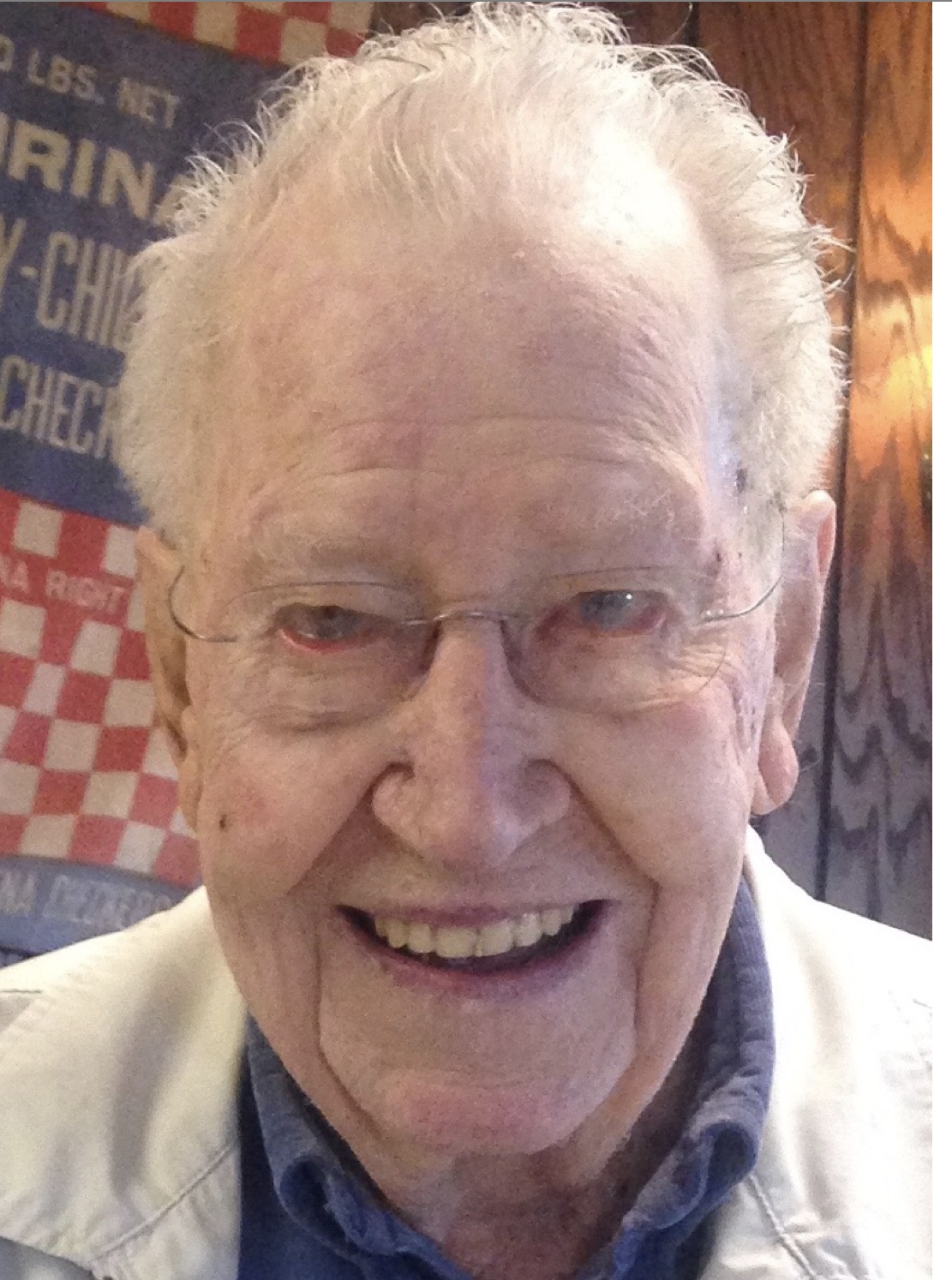 Lifelong Goreville resident William Don Kelley passed away at 3:15 a.m. Sunday, Feb. 11, 2018, at Herrin Hospital in Herrin, Ill., of complications related to congestive heart failure. He was 97. Mr. Kelley was a businessman, civic leader, antique-car collector, prankster and storyteller. He held a beloved place in the Goreville community and in the hearts of his family. He went full throttle with a passion for life, love, and the pursuit of antique and novelty vehicles. Wheeling and dealing was pure joy for him. He consistently won trophies at car shows and was active in local car clubs with his wife, Juanita. He owned 300 vehicles over his lifetime, driving many of them in local parades. He drove his favorite, a Thunderbird convertible he called the Thunder Chicken, to have coffee with friends. His Segway reflected his playful spirit. He was a natural entertainer who loved gatherings so he could try out his vast repertoire of jokes and stories. “If you get serious about things, people will start worrying about you,” he said. He was a remarkably generous man who was quick to provide transportation, housing, or money if a friend or family member was in need. He donated to area churches to help provide a steeple or new stained glass. He gave to the Shriners Hospitals for Children and was an active member of the Goreville Masonic Lodge. Mr. Kelley was born July 25, 1920, in rural Goreville to Samuel Calvin Kelley and Thursa Ellen (Calhoun) Kelley. He married Juanita Parks on Aug. 26, 1939, in Kentucky, and tipped the minister so grandly that he and his bride had to borrow money for the toll bridge back to Illinois. He dropped out of high school to work for Bill Henley at the Socony-Vacuum / Mobil Oil gas station in Goreville. One day, Juanita strongly suggested that he finish attending Goreville High School, and he was graduated in 1940. He and Juanita moved to Elgin, Ill., where he held a variety of jobs. He also worked in Joliet at the Kankakee Ordnance Works. There he was a brakeman at the “Big Four Railroad” roundhouse and was a fireman feeding coal into the steam locomotives. In 1944, he joined the U.S. Army Air Corps and was stationed at Millville Army Air Field in New Jersey, Fort Hood and Wichita Falls in Texas, Dover Air Force Base in Delaware, and Edwards Air Force Base in California. He served as a heavy equipment operator hauling planes and parts. He also traveled with deceased soldiers to restore them to their families with dignity. From 1949 to 1950, he was with the Illinois State Police. From 1950 to 1954 he was a self-employed truck driver and worked for Mayflower Transit. In 1957-58, he bought the Mobil gas station in Goreville and ran it with his son, Ron, for many years. The Goreville State Bank opened in 1963 with Mr. Kelley on the board of directors. In 1963 he began working as a security supervisor and patrolman on the Lake of Egypt for the Southern Illinois Power Cooperative (SIPC). In 1985 he retired from SIPC and joined Bill Martin Trucking Co. There were few roads he hadn’t traveled, and he said he had driven in every major U.S. city. He loved a road trip, and in September 2017, he and a nephew chartered a bus to take the extended Kelley family to Nashville, Tenn., to celebrate the 100th birthday of his brother, Lester “Bus” Kelley. He was a powerful man physically, with an equally strong character. He was a straight-shooter and stood his ground with backbone, persistence and grit. You could count on Bill. His imposing height and booming voice could be intimidating, but his heart was huge. He was keenly observant and quick witted. He laughed loud, grinned big, and valued honesty above all else. His word and handshake were as good as gold. To the end, he continued to share the gifts of his humor, the strength of his handshake, the warmth of his smile. Then “I’m shutting the power off,” he told us in his last days. With great courage and peace, he decided he would no longer accept lifesaving support. He left this world on his own terms. He “eased on down the road,” said the nurse who watched over him as he gently slipped away. Mr. Kelley often shared trucker wisdom as visitors left him to drive home. His three Rules of the Road apply to life as well as to driving: Keep the greasy side down. Watch the car behind the car in front of you. Don’t drive faster than your guardian angel can fly. Mr. Kelley is survived by his daughter, Donna and Barry Eastman of Goreville; daughter, Pam Kelley and Gary Marx of Carbondale, Ill.; daughter-in-law, Mary Kelley of Goreville; sister-in-law Evelyn Davis of Goreville, Ill.; sister-in-law, Violet St. Aubin of Warrenton, Mo.; sister-in-law, Doris Parks of Austin, Tex.; grandchildren, Tia (Kelley) Fosse, Amber (Kelley) Parr, Angela James, Travis Kelley, Teresa (Eastman) Weitlauf, Matthew Eastman, Melanie (Eastman) Barker, and Willa Billingsley; 15 great-grandchildren; and six great-great-grandchildren. He also is survived by his brother Lester “Bus” Kelley of Nashville, Tenn.; as well as many loving nieces and nephews whom he loved like sons and daughters. He was preceded in death by his wife, Juanita (Parks) Kelley; son, Ronald Kelley; brother, Francis Kelley; and sister, Blanche (Kelley) Ray. Funeral services for Mr. Kelley will be Wednesday, Feb. 14, 2018, at 11:00 a.m. at Blue Funeral Home in Goreville, with the Rev. R. G. Null officiating. Visitation is on Tuesday, Feb. 13, from 5:00 p.m. to 8 p.m. at the funeral home in Goreville with military rites provided by Army National Guard, Johnson County VFW. Interment will follow the funeral service in Cana Cemetery-Goreville. Memorial donations are suggested to the donor's choice; envelopes will be available at the funeral home or may be sent c/o Blue Funeral Home, P.O. Box 411, Marion, IL 62959.
To order memorial trees or send flowers to the family in memory of William “Bill” Kelley, please visit our flower store.