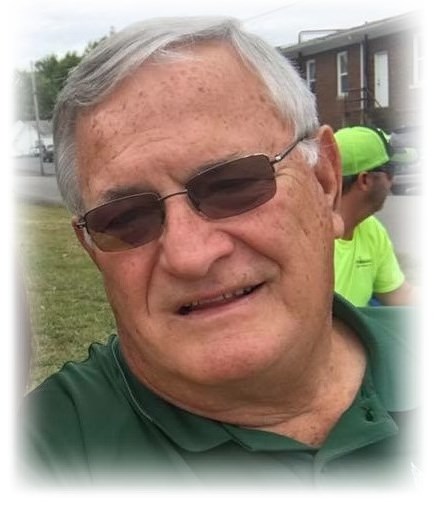 William “Joe” Elliott passed away peacefully Monday, November 27 at Siteman Cancer Center at Barnes-Jewish Hospital in St. Louis, MO after a brief battle with cancer with his loving wife and daughters by his side. Joe was born February 22, 1949 in Watseka, Illinois to Cecil and Elsie Elliott. He married his grade school sweetheart Marcia Clement on June 8, 1969 and together they shared 48 years of marriage.  Joe graduated from Watseka High School in 1967 where he was a standout athlete and Southern Illinois University in 1972 where he majored in Education. After graduation, he began a 35 year teaching career at Marion High School where he was a beloved English teacher.  For 21 years he coached football, girls’ basketball, and girls track.  He bled blue and gold and remained a loyal supporter of Marion Athletics and a substitute teacher long after his retirement. He impacted the lives of thousands of students thought his career and touched the lives of countless others through his dedication to his community. He was proceeded in death by his Grandparents, father, Cecil Elliott; mother, Elsie Elliott; step mother Norma Elliott; brothers, Paul and Cecil K. Elliott, and sister-in-law Deanna Elliott. He is survived by his wife Marcia. Daughters Amy (Steve) O’Keefe of Marion, and Cindy (Jason) Gibson of Geneva, Illinois. Four grandchildren: Abby and Elliott O’Keefe and Maggie and William Gibson.  Brothers: Stan (Jeanne) Elliott of Watseka, Illinois, Robert (Donna) Elliott of Moore, South Carolina; and Rick (Robin) Elliott of Greer, South Carolina as well as numerous nieces and nephews. Visitation will be held Friday, December 1 at Blue Funeral Home in Marion from 4 to 8 PM. Funeral Services will be held at 10 AM Saturday, December 2 at the funeral home with the Rev. Lance Leeds officiating along with long-time friend Mike Rude and son-in-law Steve O’Keefe. Memorials may be made to the Marion Unit 2 Foundation and will be accepted at Blue Funeral Home/PO Box 411/Marion, IL 62959
To order memorial trees or send flowers to the family in memory of William "Joe" Elliott, please visit our flower store.